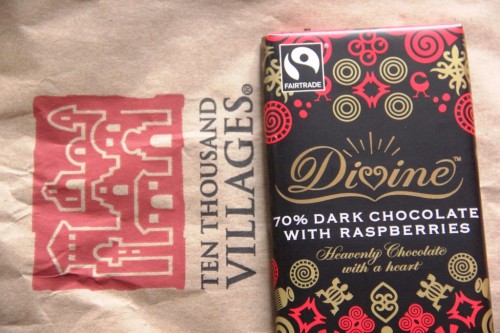 If I have to choose between organic chocolate and fair trade, I will usually choose organic.  Fair trade is a complicated subject, but the chocolate that I eat is almost always premium bars meaning the chocolate maker is paying top prices for the beans – well over the fair trade minimum.  In essence, I’ve got fair trade covered when I buy premium bars such as those by Amano, Pralus, Zotter and Original Beans, to name a few.

I understand not everyone wants to shell out five to ten bucks for a bar, even if it’s the good stuff.  If you’re looking for value, you might have to go with something made from more of a bulk bean such as the Forestero variety that’s ubiquitous in Ghana.   Thanks to Divine chocolate you can pick up some dark and accessible goodness for about  four dollars.  It’s not organic, but at least it’s fair trade.

I had run out of chocolate while on a little vacation trip last year and picked up this Divine Chocolate bar to keep me going.  Here’s what I found.

Where to buy: Ten Thousand Villages (availability may vary by store) and some natural foods stores. 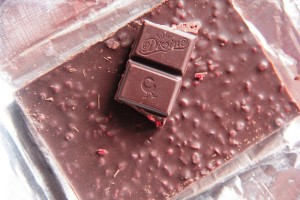 There’s more than a generous helping of raspberries in this dark chocolate.

MIDDLE TASTE:  The raspberry flavor gets more tart in the middle with some acidity to balance out the chocolate.  The base chocolate is relatively simple, but with decent structure.  It takes a lot to stand up to the tartness of the raspberries and this chocolate, while not mellow, is not quite strong enough to win the fight.

FINISH:  The chocolate comes back on top at the end with warm notes turning into bread and butter flavors.

TEXTURE: There are tons of raspberries here, as there should be to give an interesting crunchy texture that turns smooth with a few seeds left at the end.

LAST BITE: A funny thing happens when dried raspberries combine with chocolate – it creates a sort of artificial candy scent.  To be clear, there is nothing artificial in this bar, but if you’re like me, you will feel this unnaturalness about it.  Later as it all melts and the raspberries come to life, it feels more real – like the mouthful of chocolate coated raspberries that it is.

I have mixed feelings about chocolate from Ghana since it’s been reported that some of the farming practices there are not very sustainable, let’s say.  But I do like that Divine gives partial company ownership to the farmers so that they can share in the profits and we get a decent bar at a decent price.  If they can find a way to clean up the farming practices in Ghana so their more environmentally and people friendly, we’ll have a win-win-win.  Ghana produces tons of cacao beans every year, so I think we’d best be patient and support movements in the right direction such as Divine Chocolate.

If you’re looking for value chocolate that’s organic, you might also want to try the prolific Theo Chocolate.

Note: I paid for this chocolate myself.