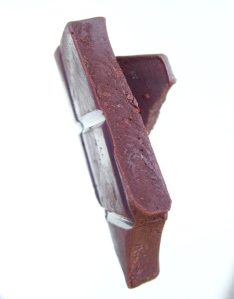 I’ve had the pleasure to taste so much superb chocolate from the Caribbean – Taza’s Stone Ground 80% from Dominican Republic beans, Theo’s single-origin Costa Rica, Grenada Chocolate Company’s 71% dark chocolate, and Valrhona Gran Couva from Trinidad to name a few.  So how is it that when thinking about chocolate, most of us have entirely forgotten about Cuba, the largest and most populous island nation in the Caribbean?  Hiding on this 745-mile-long island, somewhere among the sugar cane fields and coffee plantations and far from the cafes, bars and baroque architecture of Havana, are cacao farms producing brilliant single-origin trinitario beans.

I know this only because Francois Pralus has not forgotten about Cuba. One way or another, he’s secured a relationship with cacao growers and brought sacks of beans back to Roannes, France to do what he does best – make bean-to-bar chocolate.

With the southern edge of the island just barely dipping its toe into the “cocoa belt” at 19° 49’ north of the equator, Cuba may not boast the most hospitable climate to grow cacao, but sometimes wonderful things emerge from hardship.  It’s yet to be entirely seen what will emerge from Cuba’s political and economic hardships, but as far as Cuban cacao, I’ve got some answers thanks to Pralus’ imagination[1].

WHAT:  Francois Pralus Cuba Single-origin Dark Chocolate.  75% Cacao. 100g. Ingredients: cocoa, sugar, pure cocoa butter, non-GMO soy lecithin. May contain traces of nuts or milk.  Note:  while the laws are not clear, it would be unlikely to find this product for sale in the USA at this time.  You may need to go to France where it is produced.

FINISH:  Honeydew melon, cream, cinnamon, molasses, a distinct wave of buttered sour-dough bread, and a long, complex herbal note.  After one of the cleanest, long finishes I’ve ever tasted, there’s a nice quiet ending.  Nothing bitter. Ever.

TEXTURE:  Creamy and soft.  Remember, I tasted this chocolate  in July and as you can see by the photo, the chocolate began to melt a bit, but was in much better shape during my early morning tasting.

LAST BITE:   This bar is worth discovering for its creamy nutty character and classic complexity.  If you’re looking for bold fruit, there are bars that do that better, but Pralus compromises a bit on fruit for something that is never bitter and always soft and voluptuous on the tongue.

If you want to learn about complexity, then this bar offers a delicious lesson.  Complexity is not just a mixture of flavors within a dark chocolate.  Rather, complexity is waves or peaks of different flavors that come at different times and often well into the finish.  I gave this bar the most points for the finish and texture and the least for the somewhat closed aroma.   It’s worth a try as a lesson in complexity or to explore an obscure cacao growing region.

[1] I don’t pretend to understand the political complexities of Cuban agriculture and export.  My view on these things is simple – the people of a country are separate from its government.  As much as farmers are real people trying to make a living, I’m  happy to support them, despite their captivity or complicity in an archaic social-governmental system.